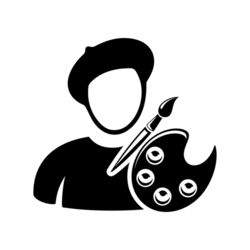 City, State, Country:
Chesterfield, Missouri, USA
Artist Information
As a creative hobby, I bead in the evenings when I'm not gardening or taking care of ArtQuest. After losing several pair of sun glasses, I could not find a lanyard that was made with specialty stones. It was either a sport lanyard or something that I just simply wouldn't wear. I then attempted to make my own and found that I actually enjoyed beading. I've literally made hundreds of lanyard's for people who see me wearing mine and for a few specialty boutiques.

Ernest Trova (1927-2009) was a self-trained American painter and sculptor. Best known for his signature image and figure series, The Falling Man, Trova considered his entire output a single "work in progress." He began as a painter, progressing through three-dimensional constructions to his mature medium, sculpture. Trova was among the most widely acknowledged sculptors working in the United States, resulting in invitations to exhibit in three Whitney Annuals and three Venice Biennales. In 1969, his work was heralded by the New York Times as “among the best of contemporary American sculpture,” and throughout decades, many examples of his sculpture were prominently displayed in dozens of major museums including the Museum of Modern Art, the Whitney Museum of American Art and the Walker Art Center in Minneapolis.

Beading has always been a way for me to be creative. I chose to create leashes that hold all manner of eye glasses around the neck since my friends seemed to always be losing their glasses. I chose to work in the best of beads so that they were not only useful but a beauty to wear.

Keith Haring (1958-1990) was an American artist whose pop art and graffiti-like work grew out of the New York City street culture of the 1980s. Haring's work grew to popularity from his spontaneous drawings in New York City subways working in chalk-like outlines of figures, dogs, and other stylized images-on blank advertising-space in the subway.

From humble beginnings as a painter, Yankel rose to become an internationally recognized artist. Born in 1945 in Alma-Ata, the capital of the Kazakhstan Republic near the Chinese border, he has climbed as a painter and sculptor of indisputable ability. He focuses his talent on monumental canvas paintings, acrylic sculptures and tapestries that make him one of the most dynamic artists in the world today.

Anders Knutsson was born in Malmo, Sweden in 1937 where he studied art and engineering. He is a swedish postwar and contemporary painter who came to the United States in 1967 to work in the aerospace industry and became a citizen in 1976. He has studied and developed his art throughout his entire life. He has lived in Illinois, Ohio, California, Vermont, Toronto and since 1976 in New York City. Anders currently works and lives in the Clinton Hills section of Brooklyn with his wife Doris Schultz. His recent body of work features portraits of landmark and endangered trees.

Robert Downing RCA Hamilton, ON, Canada 1935 - 2003 Statement by Robert "I am not so much interested in making images with the computer, as I am in exploring the kinds of images which the computer automatically produces. Clearly, I never seem to tire of the infinite variety of "mandala like" images this approach makes possible because I have worked in the style of the post modernist pattern and design movement since 1966. I first used the computer to assist in the making of a series of fine art prints: The I'Ching Series, in 1973." An established Canadian artist, Robert Downing primarily worked with digital / computer-generated art. A very prolific artist, his work has been shown in 77 exhibitions in 7 countries and he also completed 16 commissions in 3 countries. In 1969, he became the first Canadian artist with a solo exhibition in a major European public gallery, the Whitechapel Art Gallery, London.

Will Barnet (1911-2012) was a 20th century American artist best known for his paintings and prints in his distinctively flat aesthetic. His paintings often feature solitary figures with birds set amidst an ominous background. His career spanned over 80 years. Born on May 25, 1911 in Beverly, MA, Barnet went on to study at the School of the Museum of Fine Arts, Boston and later at the Art Student’s League of New York. Today, Barnet’s work is in the permanent collections of the National Gallery of Art in Washington, D.C., The Museum of Modern Art in New York, the Philadelphia Museum of Art, and the Museum of Fine Arts in Boston, among others. He died on November 13, 2012 in New York, NY at the age of 101.

Welcome to ArtQuest®! Since 1991, ArtQuest® has been a pioneer in providing an online place to buy and sell art from all over the world. Eliminating the middleman fees found in buying and selling art was our goal back then and still is today.